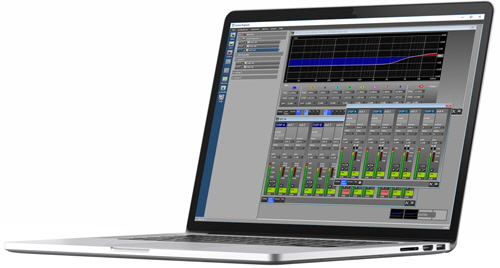 he NOVA.Net „System Engineer“ PC app is much more than just a remote control panel for a TX amplifier. The PC app and any
connected device(s) become intimately intertwined, faithfully duplicating any control adjustments whether they are made in
the application or on the front panel of the device itself. Adjust a gain control on the device, and watch the gain value in the
app smoothly slide in sympathy. Each input and each output can be named in the application. These names not only appear
for the user on the application control panels, but also show when scrolling through the inputs and outputs on the device
itself. Even a firmware update can be made easily via the network.High Speed Interface
The TX amplifiers include a high speed ethernet communications interface that supports DHCP, static-IP and
auto-IP and direct connection to a computer without the need for a router or a switch.AES3 and Digital Networked Audio
The TX amplifiers offer a dual channel AES3 input as standard. The DANTE audio
networking card is available as option
https://www.novacoustic.com/PRODUCTS/by-Series/Power-Amplifiers/TX-Series/tx-series.html

There are no reviews yet.